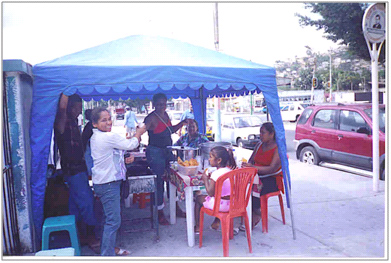 Esmeraldas, situated on the northwestern coast of Ecuador, is one of the poorest provinces in that country. When the Esmeraldas Chapter of the Black Women’s Association received a donation of $300 from a visiting student group, they decided to use it to start a community bank to provide credit to Association members for income-generating microenterprises. Most of the women worked as laundresses and domestic workers earning an average of $30 a month, at that time. They contacted microfinance organizations in Ecuador requesting information about how to go about setting up a community bank but no one was able to help them. Unsure how to proceed, but determined to accomplish their goal, they searched the Internet for information about comunal banks and came across an issue of the Women’s Development Network newsletter dedicated to micro credit. The coordinator of the Asociation in Esmeraldas wrote to the Network Coordinating Team recounting their unsuccessful efforts to get information and advice on starting a community bank; she asked whether the Network could provide the needed assistance. Her first question, however, was whether the Network accepted black women, a question which dramatically demonstrates the level of discrimination they experience, and perhaps explains why they had been unsuccessful in getting the help they needed from the people they had contacted in their own country.

The Network Coordinating Team put the Black Women’s Association in touch with a Network participant working with a large microfinance organization in Peru. She provided them with all the information and advice they needed and within six months, the women in Esmeraldas awardrf the first loan of their new “Progressive Bank”. The loan allowed the nine-member group “Black Women for Progress” to get the necessary permits and set up a sidewalk food sales kiosk. Since that time, the Association has established 6 comunal banks with a combined membership of 195 women.

The Women’s Development Network was established to help grassroots women overcome their isolation and increase their access to the information, advice and inspiration they need to achieve sustainability in their economic projects and accomplish their economic goals.

The isolation that perpetuates the cycle of poverty in which so many women live arises from a variety of conditions, all of which impede women in achieving the economic development that would allow them to improve the quality of life for themselves and their families through their productive activities

Most common is geographic isolation. Many live in areas removed from urban centers, where roads are frequently impassable during long periods in inclimate weather, where public transportation is usually rudimentary at best, where basic public services are generally deficient, where paid jobs are scarce and women depend on the income they can generate from their productive efforts to support their families. In recent years, even in some of the remotests areas, access to electricity and subsequently to the Internet has given a great many women a way to overcome, or at least mediate, their geographic isolation, as in the case of the Black Women’s Association in Ecuador.

Yet another form of isolation is formational (educational, academic, vocational). There is considerable statistical evidence of discrimination (for a variety of both intentional and unintentional reasons) against women’s participation in formational activities–opportunities to get the education or training that would increase their chances for success in their economic enterprises. Consequently, women have fewer opportunities to acquire skills or broaden their horizons, isolating them from the larger world and impeding not only their economic development but limiting their possibility of becoming protagonists of their own destiny.

Due in large measure to the isolation in which so many women live, a large percentage of the economic activities they undertake are stalled at a subsistence level. As a result, the income that they earn for their productive work is not commensurate with either the time they dedicate or their economic needs. Overcoming isolation and accessing the necessary resources are fundamental steps in the process of confronting the many obstacles to low-income women’s economic development.

While it is true that starting a productive enterprise requires some level of financial investment, it is certainly not true that women cannot accomplish it without financing from outside sources. In our experience, the “necessary resources” are rarely financial. More valuable, perhaps, are the “resources” of information and inspiration, because with these resources women can learn how to raise their own capital and manage their enterprises effectively, which may make them more stable and sustainable in the long run, since their success is a direct result of their own initiative and effort.  Even though financing is undeniably a valuable resource, the reality is that only a fraction of women who need to generate income through an economically successful productive enterprise will ever receive outside funding for it. Recognition of the value of other kinds of resources, as well as efforts to broadly share those resources, can contribute a great deal to effective economic development for all women.

An illustration of this is the experience of a group of women in Arequipa, Peru who organized to start a small business together to generate income for their families. They decided to produce cider vinegar for its health benefits and because it was a product for which there was a growing demand in their area. Constrained by the amount of capital they were able to invest in the start-up, their first step was to find a recipe for cider vinegar that could be produced in industrial quantities using the household equipment and utensils they collectively had. However, the only recipes they found required equipment they could not afford. They communicated their need to the Coordinating Team of the Women’s Development Network and received a manual from the Network library entitled “Making Fruit Vinegar” that not only gave a recipe for industrial quantities of cider vinegar using household utensils, but also provided instructions on how to set up and run the business (production processes, quality control, costs and pricing, etc.). With this manual, the women were able to start their business. 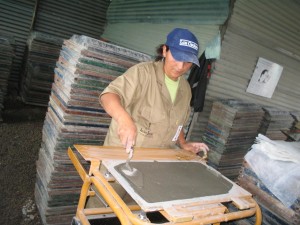 Inspired by the experience of the women of ACOTEJERA (a cooperative of 5 Salvadoran women’s groups producing micro-concrete roofing tiles), a group of 14 Colombian women have progresed from earning (US)$2.50 a day, working in difficult and dangerous conditions, collecting and recycling trash in Bogata, Colombia, to being the owners and operaters of their own roofing tile business. 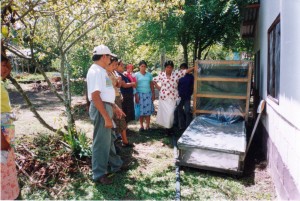 design for a rustic solar dehydrator with COMUCAP, a rural women’s association in Marcala, Honduras. The simple, low-cost construction of the dehydrators allowed the Honduran women to use otherwise wasted resources, produce new products and generate more income. The women of COMUCAP also benefited

Through an alliance with IDEIAS, a student volunteer organization at the University of Mannheim, Germany, participating groups in the Network have benefited from professional services provided by the students, which they would otherwise not have been able to afford. Volunteers have worked with groups and organizations in the Network to develop accounting systems, commercialization plans, ecoturism programs, training materials for microenterprise development, project proposals, among many other things. The relationships forged in the course of these experiences has also resulted in greater publicity abroad for the work of the groups and organizations, and in some cases the establishment of funds for continued support.

Participation in the Women’s Development Network only requires a willingness of members to share their knowledge, skills, information and experience with others in the Network, and it provides women with access to all of these non-financial resources from all the other participating women’s groups and organizations throughout Latin America and the Caribbean.

In December 2009, Beatriz Delgado (from Bolivia) asked Hilda Valenzca (from Peru), both active participants in the Network, to lead a workshop in Cochabamba on communal banks that the Bolivian artisans organization she works with was interested in organizing to help the artisans increase their access to credit. Through the Network, Beatriz knew of Hilda’s experience in Peru with communal banks, as a promoter with indigenous women’s groups in Juliaca. Beatriz described the spirit and success of this collaboration: “They were amazed, and they didn’t even get tired. They wanted to know more. They even gave up the afternoon break and had the refreshments served in their chairs because they wanted to keep listening to Hilda…The next day we continued the discussion and Hilda told us step by step how to implement a commual bank…The artisans explained their needs and Hilda responded to all of them. Afterwards they thanked her not only for sharing her experience, but for her warmth and generosity with them.” Hilda recounted that “the participants were very interested in our experience. All their concerns were addressed and we saw together that it is possible to implement a communal bank project that strengthens both the organization and the human values of its members. They said that they had considered implementing a communal bank project many times, but they did not know how to do it, or that it was so easy. The meeting concluded with their commitment to implement the communal bank project using our experience.”