“For us organzing has been and is crucial for achieving change. Only through collective action can we find solutions to our problems and dream incessantly… “, a Café Femenino farmer 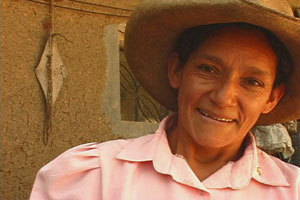 Sabina, one of CF's leading women

In Peru, coffee production is mostly done by women in rural areas. But they seldom receive the economic or social benefits. In addition, 41 percent of these women suffer emotional and physical abuse and myriad forms of gender-based violence. Café Femenino is the story of their struggle against poverty and patriarchy. Watch the video Worth Celebrating.

The coffee crisis of 1992 prompted women producers to organize and develop strategies to change their economic and social exclusion as producers/farmers and as women. The immediate economic crisis was so acute that to buy 1 bag of rice at that time, they had to sell 1.5 bags of coffee.

The depression in the global coffee market and the fall of coffee prices to abysmal levels revealed the extremely unequal trade position of small producers. The threats to their livelihood were immediate and real. It was in this context that the coffee farmers and local NGOs decided to try alternative markets. They opted to certify their coffee as organic in order to sell it in the American market with the assistance of the Organic Products Trading Company (OPTCO), a Canadian organization which works with producer communities in the South. Because the farmers had always used sustainable and organic practices, it was not difficult to get the certification. This involved 50 producers, of whom 8 were women. As production expanded, so did the number of communities involved and the numbers of coffee producers who were women.

The idea of producing a specialized and separate brand produced by women was born at this first meeting of women coffee producers in 2003:

“Out of this a new idea—separating their coffee from the rest of the production—was proposed. This concept was conceived through the combined efforts of PROASSA, CICAP, CECANOR, and the women themselves searching for ideas that would improve the conditions of their lives”.

PROASSA (Promotora de la Agricultura Responsable) is a producer and exporter of certified organic coffee and has been in operation since 1992; CICAP is a local NGO; CECANOR, the Central de Cafetaleros del Nor Oriente is the coffee cooperative:

“Today, 30% (745) of the participants in CECANOR are women. Each day they assume more responsibilities not only in positions of leadership in grassroots organizations, but also in higher level offices”.

There are currently 464 women coffee farmers involved with Café Femenino. The coffee is sold in the Fair Trade market because it is produced organically, sustainably and under equitable labour practices. An extra 0.02/lb goes directly to the women to spend as they see fit in order to improve their lives. For example, due to limited resources, families often prefer to send the sons and not the daughters to school. This social norm also limits the public role of women who are reluctant to participate in activities outside of the home. This additional income helps overcome this particular form of social exclusion and through that, to challenge socially accepted gender roles.

Café Femenino has helped engender processes through which women were able to challenge gender inequality in various stages of the productive process. These activities range from planting, harvesting, shelling, fermenting, washing, drying, packaging and now, even selling and the making decisions regarding the allocation of proceeds. It is now required that at least one woman serve on the Board of Directors of each coffee association that contributes to the coffees imported by the OPTCO. A woman is also required to serve on the Board of Directors for the fair trade co-operative CECANOR. 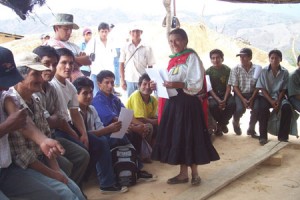 A meeting at Cafe Femenino

As often is the experience of women, the challenging of power relations and gender injustice are not easy tasks and require high degrees of cohesiveness and mutual support. Some of these needs are addressed through regular workshops in which the Café Femenino producers participate. These workshops provide a space for reflecting on issues of self-esteem and gender-based violence. Other workshops address the more technical and economic aspects of improving Café Femenino’s products.

Note: We would like to thank PROASSA for providing us with the material in this story.