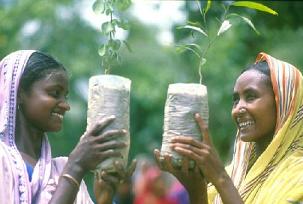 Climate change is real, it is happening already, and its impacts on people are not gender-neutral. It is affecting men and women all over the world differently, especially in the world’s poorest countries and amongst the most vulnerable people and communities. As women and men have different adaptive and mitigative capabilities, the financing instruments and mechanisms committed to climate change activities in mitigation and adaption need to take these gender-differentiated impacts into account in funds design and operationalization as well as concrete project financing.

The demand for a significantly scaled-up global effort in climate financing comes at a time of multiple crises, with development progress toward the achievement of the Millennium Development Goals (MDGs) by 2015 stalling and an expected 65 million people – many of them women and other vulnerable groups – slipping back into poverty globally alone this year due to the first global recession since World War II according to the World Bank. National budgets in developed and emerging market economies have been severely stressed with large scale financial sector bailouts; the United States alone, incidentally also historically the biggest emitter of greenhouse gases, had committed to roughly US$ 5 trillion in bailout efforts. In spite of this – or rather because of this, since the economic, development and climate crises can only be solved together – large-scale mitigation and adaptation efforts globally cannot take a back seat, nor can ambitions for adequate climate financing be scaled down. Massive expenditures, while costly, are unavoidable. Their realization is as much a matter of global justice – the countries most affected by climate change are also the ones that contributed the least to it – as of political will. That it can be mustered to deal with systemic threats to the global system had been demonstrated in the case of the global financial sector rescue efforts. While substantial, gender-equitable funding for global climate adaptation and mitigation efforts would still cost only a fraction of what the world community was willing to muster in a few weeks in response to the financial markets’ meltdown of Fall 2008.

So far, environmental financing mechanisms (one could take the Clean Development Mechanism, CDM, as an example) have provided only limited benefits for the Least Development Countries (LDCs) and the poorest and most disadvantaged within those countries. Women as a group are generally least considered by modern environmental financing mechanisms. The reasons are manifold and can be found among those impeding women’s development all over the world. They range from a lack of access to capital and markets, to women’s unrecognized and uncompensated care contributions, to lacking legal protection and ownership rights to cultural and societal biases against women’s engagement in learning, political participation and decision-making processes.

The last few years have seen a proliferation of several dozen new instruments for climate financing with a multitude of actors. These new mechanisms range from bilateral and national funds to multilateral ones under the auspices of the UN and the World Bank and the Multilateral Development Banks (MDBs), carbon funds as well as the prospect and promise of regional and national cap-and-trade schemes where auctioning of pollution permits could yield billions of dollars in proceeds to be used for mitigation and adaptation efforts. Yet, so far none of these new financing initiatives has been engendered. The challenge and the potential is to ensure that gender differentiated impacts and capabilities are an important consideration in ongoing climate finance discussions and in fund operationalization. There can be no fair and equitable global climate agreement without a comprehensive global climate financing understanding. And this understanding can only be fair, equitable and comprehensive when it incorporates gender awareness and strives toward gender equitable climate financing solutions.