Excerpt from Women’s labour migration in the context of globalization, 2010
By Anja K. Franck & Andrea Spehar, produced by: WIDE 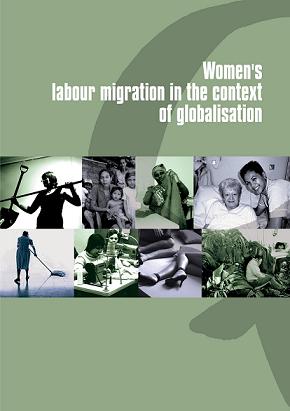 Migration of women is certainly not a new trend, but it has only just begun to be recognised more widely. Women currently make up around half of the world’s estimated 210 million international migrants. Women – old or young, single or married, with or without their families – are increasingly moving across national borders in an effort to improve their own and their family’s well-being. Despite the diversity of women’s migration patterns, their manifold reasons and causes for moving, women’s labour migration stimulated by large economic and social inequalities in the world is becoming ever more significant.

While globalisation has led to the acceleration of international trade and capital flows, and international migration has increased alongside this, governments and the international community have so far failed to address this facet of global development from a coherent rights and development perspective. They fall short creating an environment that enables migrants to fully exercise their economic, social, cultural and political rights, protect their physical security, and fulfil their aspirations and expectations. Instead, as we can witness in the European Union and most of its Member States, restrictive migration policies are formulated and implemented that aim to prevent and control migration to meet the Union’s economic needs and ensure its competitiveness.

International migration is a complex and often contradictory process, which provides women with opportunities for social and economic mobility, but can also subject them to new forms of exploitation, abuse and exclusion. Women tend to be disadvantaged in the process of migration compared to men and face multiple challenges and adverse conditions based on the intersection of gender, age, nationality, class and ethnicity. The disadvantaged position of many migrant women leads repeatedly to increased exploitation and a growing vulnerability of their health, bodily integrity and well-being.

Women migrant workers engage in a wide range of activities and at numerous skill levels, but, because of the gender division of labour, they are vastly over-represented in casual, temporary, sub-contracted and informal employment. These jobs are characterised by insecure conditions, low wages, poor working conditions and a lack of social protection. In most migration flows involving high-skilled employment – obviously less likely to take place under exploitative conditions – women are in a minority.

The causes and desperation that drive economic migration, as well as the adverse and exploitative conditions that it can result in, should not be underestimated, yet for many women migrants the process of migration can form an empowering experience and have an important liberating effect, leading to positive social change.

Understanding the complexity of the influence of globalisation and the ongoing economic and social restructuring processes on women’s work, mobility and empowerment is an important aspect of WIDE’s struggle for global economic, social and gender justice. This study offers entry points for an in-depth discussion around these issues. It tries to understand and bridge the gaps between feminist analysis and practice on both economic and migration issues.

For WIDE, this debate is not a new one; when it was founded in 1985, migrant women’s organisations such as Akina Mama Wa Afrika belonged to the core membership. This new publication is part of a wider range of activities that aim to strengthen links and cooperation between European women’s organisations and migrant women’s groups and networks. It reflects part of WIDE’s commitments made in its strategic programme 2008–2011: An End to Contradictions: Working on Gender Equity and Social Justice – West, South, East, which includes awareness-raising and capacity-building on new global patterns of social exclusion, poverty, inequalities and movement of people impinging on women’s rights and access to decent work and sustainable livelihoods as key issues.