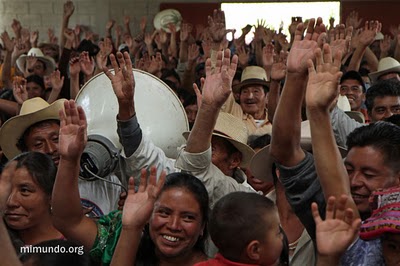 On a historic day, residents from the municipality of Santa Cruz del Quiché – one of Guatemala’s most important hubs and the birthplace of the Maya K’iche’ people – unanimously rejected the exploitation of natural goods and resources, in particular through mining and hydroelectric activities.

“Due to the lack of political will demonstrated by the State of Guatemala in carrying out its obligations to consult the local indigenous populations as stated in various accords, particularly Convention 169 from the International Labor Organization, and faced by the proliferation of licenses to explore and exploit their natural resources without consent, local indigenous peoples have organized themselves and carried out their own community consultations. These plebiscites have fortified their will both in the national and international stages, and strengthen their right to auto determination, land tenure, natural resources, health, and life itself.” 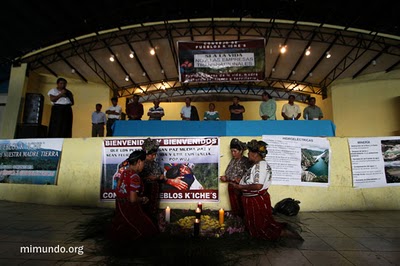 A Mayan ceremony launches the orientation session for the dozens of national and international observers who were to participate in the Community Consultation of Good Faith for the Municipality of Santa Cruz del Quiché regarding the extraction and exploitation of natural goods and resources. 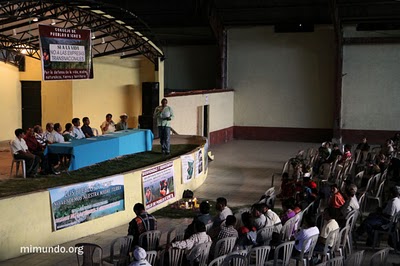 Around 175 observers arrived from numerous countries and municipalities within the Republic in order to validate the process. 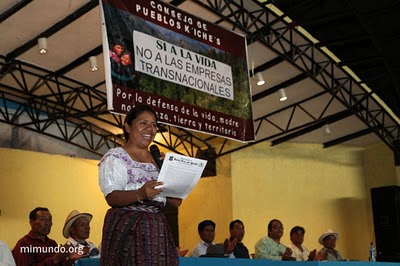 Lolita Chávez, coordinator of the K’iche’ People’s Council (Consejo de Pueblos K’iche’s, or CPK, in Spanish), reads the municipal act number 62-2010, official document that ratifies the plebiscite. The CPK belongs to the Western People’s Council, or Consejo de Pueblos del Occidente in Spanish. This umbrella organization spans several departments in the Guatemalan western highlands and defines itself as a “space where the original peoples of the region can summon local support for relevant struggles and gather their own representatives with the final purpose of strengthening and articulating efforts in response to common issues that affect local communities.”