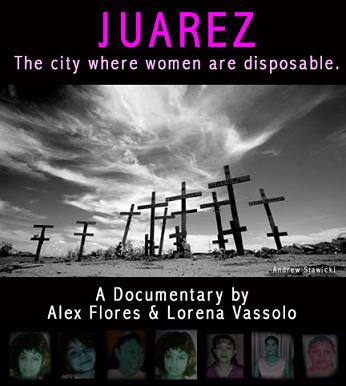 In 2007 Las Perlas el Mar Productions, created a documentary about the theories found by family members of the victims, forensics, journalists, artists and activists in Mexico, questioning why the federal government had not intensified its interest to thoroughly investigate the brutal murders of over 460 women in Ciudad Juarez, Chihuahua.  Juarez exposes the high levels of corruption and violence in Mexico, which have led to increasing violence and murders against women. Also, the documentary shows several interviews to the children of some of the murdered women of Juarez. They are the other victims of the feminicide.

Our documentary Juarez has truly been a labor of love and dedication. We have independently produced and filmed this feature length documentary, and we feel proud to have been able to contribute a deeper insight into the femicide in Ciudad Juarez as well as obtain testimonies from prominent Mexican women about the brutal violence against women in Mexico and the government corruption that continues to perpetuate violence and injustice. As women and filmmakers, we truly hope that our documentary will raise more awareness about the subject of femicide and violence against women. We also hope that it motivates people to get involved in learning more about these issues, to take action to stop and prevent any form of violence or discrimination against women and to promote justice and equality not only in Mexico but in all societies of the world.

We began our research and received a lot of support from Marisela Ortiz, one of the founders of the non-profit organization Nuestras Hijas de Regreso a Casa that helps the children and families of the murdered women of Juarez. We also received a lot of support from other women activists, artists and journalists such as Diana Washington Valdez and a Forensic Specialist, Oscar Maynez.

By April 2006, we had our script ready and began independently raising funds to be able to raise the money to shoot our documentary. This meant organizing two fundraiser dinners, including a silent art auction, and sending countless emails to friends, family and contacts asking for donations towards the documentary. Once we had successfully raised the necessary funds, we were able to travel to Mexico and shoot on location in Ciudad Juarez and Mexico City during 3 weeks in late July and August 2006.

While we were in Ciudad Juarez, we were always assisted and guided by the two amazing women Marisela and Maite. They were essential in providing us with information and setting up interviews with the children and their grandmothers. They all welcomed us into their homes and were open to all our questions. We are extremely grateful for their generosity and touched by their courageous hearts.

Las Perlas del Mar is an incorporated not-for profit organization, was officially launched on International Women’s Day, March 8, 2008, by artist, activist, and filmmaker, Alex Flores, with the vision of creating an alternative multi-media production organization that challenges white male-dominated and sexist mainstream North American media, and brings women’s and children’s stories and perspectives to the forefront.

Las Perlas is committed to expanding and changing our leadership, and recruiting women and children that bring perspectives that are as diverse as the people and issues we aim to address. We focus in violence against women and children, this problem is important for all, regardless, race, gender , religion , sexual orientation, economic status, etc. Las Perlas del Mar aims to be as inclusive as possible.

Women’s and children’s human rights continue to be dismissed by governments and citizens around the globe. More than 2500 have been killed in Guatemala since 1995; 1500 women were  reported missing in Mexico since 1993; and 500 Aboriginal women have been missing from across Canada. Violence against women is not taken seriously and governments are turning a blind eye. Canada is criticized by its treatment of Indigenous people and failing to protect its most vulnerable citizens – children. Due to all of these injustices, LPDM wants to bring in webisodes news and commentary that showcases women in politics and art and places feminist voices and ideas into the public forefront to create more visibility.