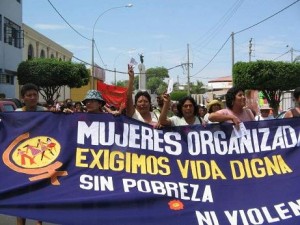 In 2002 the district of Tambogrande, Peru, organized a local referendum with the objective that citizens voiced their thoughts on the model of development they envisioned for their district. Rural and urban women took this opportunity to make themselves visible and mobilized to promote the participation of women in local development. They organized numerous workshops to formulate the Gender Political Agenda, through which they were able to identified pressing issues, develop proposals and build a collective vision of the future. Their collective struggle led to the approval of 2% of the municipal budget for gender-focused projects and strategies. This represents one of the country’s first experiences incorporating gender in local development.

The Women’s District Association of Tambogrande (ADIMTA) groups together approximately 3200 women from the district and works with the local government in projects that promote gender equality and women’s participation.