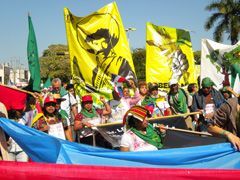 Social movements from around the world, with large representation from Latin America, arrived in Cancun, Mexico, for the 16th Conference of the Parties of the UN Climate Change Conference (COP), which took place from Nov. 29 to Dec. 10. They came to lay out their demands and put pressure on the governments of industrialized countries that are unwilling to legally commit to reductions in greenhouse gas emissions.

Representatives of grassroots organizations believe in the need to address the structural causes of climate change, primarily the capitalist system of production and consumption. To achieve climate justice, they say, it is necessary that developed countries pay the climate debt by dramatically reducing emissions, while transferring funding and technology for developing nations to adapt to and mitigate climate change.

“Thousands from Cancun”
“Campesina agriculture cools the planet,” said La Via Campesina, an umbrella group of campesino movements from around the world that for several years has made its presence known whenever there is a debate on the climate crisis.