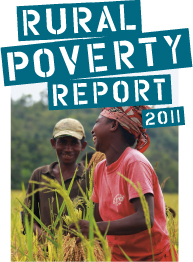 The Rural Poverty Report 2011 provides a coherent and comprehensive look at rural poverty, its global consequences and the prospects for eradicating it.

Released on 6 December 2010, the report contains updated estimates by IFAD regarding how many rural poor people there are in the developing world, poverty rates in rural areas, and the percentage of poor people residing in rural areas.

Since the last Rural Poverty Report was published by IFAD in 2001, more than 350 million rural people have lifted themselves out of extreme poverty.  But the new report notes that global poverty remains a massive and predominantly rural phenomenon – with 70 per cent of the developing world’s 1.4 billion extremely poor people living in rural areas.  Key areas of concern are Sub-Saharan Africa and South Asia.

Increasingly volatile food prices, the uncertainties and effects of climate change, and a range of natural resource constraints will complicate further efforts to reduce rural poverty, the report says.

But the report also emphasizes that profound changes in agricultural markets are giving rise to new and promising opportunities for the developing world’s smallholder farmers to significantly boost their productivity, which will be necessary to ensure enough food for an increasingly urbanized global population estimated to reach at least 9 billion by 2050.

Accordingly, “there remains an urgent need…to invest more and better in agriculture and rural areas” based on “a new approach to smallholder agriculture that is both market-oriented and sustainable,” the report says.